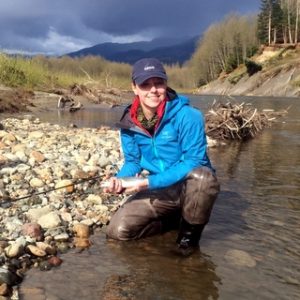 B.Sc. in Biological Sciences with specialization in Animal Biology (University of Alberta)

Rocky Mountain Sculpin (Cottus sp.) are threatened in 3 Alberta Rivers that vary in flow and level of anthropogenic modification. They are Special Concern in the Flathead River, BC, which remains undeveloped. I am comparing finescale morphometric and meristic characteristics across the four river systems. This will identify the species’ morphological adaptations to flow and river augmentation. It will also determine physical differences between the Alberta and BC populations, which are separated by the Rocky Mountain range.  In addition to morphometrics, I am characterizing resource partitioning in the BC population. Rocky Mountain Sculpin share portions of the Flathead River, BC with Slimy Sculpin (Cottus cognatus). These shared areas are known as hybrid zones. By characterizing the habitat and dietary choices of each species inside the hybrid zones versus outside, we can understand the Rocky Mountain Sculpin’s competitive behaviour.