Invasive species are recognized as one of the largest extinction threats to freshwater fishes. Invasive species are estimated to have a combined cost of $314 billion USD annually due to damages such as maintenance to infrastructure, and lost revenue from recreational fisheries. Prussian Carp are one of the most noxious non-native species in Eurasia. Recently, Prussian Carp were genetically confirmed in Alberta, Canada. Dr. Poesch and his team have been studying Prussian Carp in Alberta since 2013. Our findings show that Prussian Carp are rapidly expanding in Alberta (doubling their range every five years), that they are already significantly impacting freshwater fish and invertebrates (Ruppert et al. 2017), and that have similar characteristics as Asian Carp, one of the worst invaders in the continental United States (Docherty et al. 2017). Click on the photos, articles or news items to learn more about some of the research we are conducting on invasive species ! Note: * Lab members.

News from the Lab 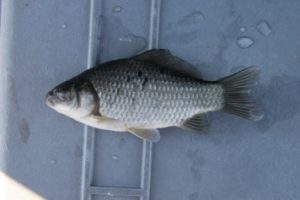 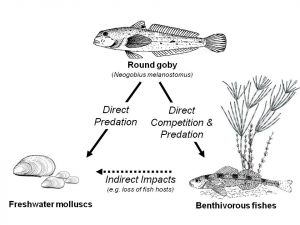 Invasion of Round Goby in Great Lakes tributaries

Understanding the spread of Whirling Disease in Alberta