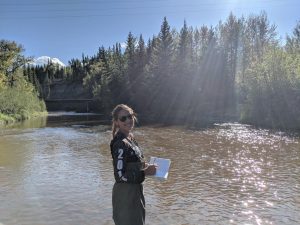 Occupancy and Impacts of the Northern Crayfish (Faxonius virilis) in Tributaries of the North Saskatchewan River Basin (link).

My interest lies in the threats that invasive species pose to freshwater biodiversity globally and improving management of invasive species to protect lotic freshwater systems. Crayfish are especially robust invaders due to their omnivorous nature and ability to compete both directly and indirectly with native species. In the North Saskatchewan River (NSR) basin, the Northern Crayfish (Faxonius virilis), was introduced and has persisted since the early 1990s. Despite the NSR’s ecological, economical, and cultural value and support of at-risk fish species, the crayfish’s impacts on Alberta’s native fish communities have yet to be assessed. In my thesis, I aimed to determine the in-stream environmental characteristics most associated with the crayfish’s occupancy in the NSR and determine which currently unoccupied tributaries are most prone to crayfish invasion. I deployed 24-hour baited crayfish traps and collected environmental measurements (water temperature (°C), turbidity (NTU), flow velocity (ms-1), and physical complexity) at 37 sites along the Alberta portion of the NSR basin. Occupancy model selection and averaging revealed that water temperature alone drove occupancy of F. virilis in the NSR and that tributaries with mean summer water temperatures greater than 18.7 °C are 50% or more likely to be occupied by F. virilis and thus, are at highest risk for subsequent invasion. Cold water streams (≤18 °C) may have some natural protection against subsequent F. virilis invasion. These results provide practical guidelines for watershed management of invasive F. virilis populations in the NSR and Alberta. To build upon this, I subsequently investigated the existence of dietary resource sharing and/or exploitative competition between F. virilis and native fish and if F. virilis sympatry was related to differences in isotopic characteristics and/or reduced condition of native fishes. To do this, I sampled ten NSR basin tributaries for F. virilis and five native common-generalist fish species and used stable isotope analysis. Moderate overlap (13.8-40.2%) of F. virilis and native fishes’ fundamental isotopic niches indicated that F. virilis have the potential to consume the same resources as native fishes. However, overall segregation of realized isotopic niches indicated a lack of actual resource sharing between F. virilis and native fishes. Similarity between the Bayesian estimated realized standard ellipse areas (SEAB), carbon ranges, and relative weight condition of F. virilis allopatric and sympatric native fish populations indicated that F. virilis have not caused negative trophic effects on the native fish species of this study. Together, these results suggest that F. virilis may be utilizing dietary plasticity to exploit a slightly different trophic niche than native fishes and in doing so, avoid exploitative competition for nutritional resources. Dietary plasticity may facilitate the establishment and invasion of F. virilis populations in currently unoccupied tributaries of the NSR where F. virilis could negatively affect rare/sensitive fish species through indirect or direct forms of competition. Watershed managers should continue to prevent further spread of F. virilis in the NSR basin. This chapter is the first to investigate F. virilis-fish interactions in Alberta.