Hydrology is a defining feature of aquatic ecosystems. Changes in stream hydrology, due to climate change, water use and impoundment, have been shown to negatively affect fish populations. Assessing changes in hydrology and its effect on fish populations and communities remains an important consideration for aquatic monitoring programmes across the globe. In this study, we used the Milk River in southern Alberta as a model system to understand how hydrologic alteration may also affect capture probabilities of fishes and impact instream monitoring programmes. The Milk River receives the majority of its April to October flow via an inter-basin transfer from the St. Mary River, drastically altering the hydrologic regime and instream habitats for fishes during this augmentation period. We estimated species-specific seine net capture probabilities of fishes in the Milk River during augmentation and natural flow periods using depletion surveys in both open and enclosed sites. Using habitat data collected during the seine surveys, linear mixed-effects models were created with capture efficiency as the dependent variable. Models were compared using corrected Akaike’s information criterion, and the relative contributions of the different variables to the top models were examined. We found that species and flow characteristics, such as water velocity and the state of augmentation, played a prominent role in many of the top models explaining variation in capture efficiency. These results demonstrate that changes to stream hydrology clearly have the potential to impact gear efficiency and individual species assessments. Stream monitoring programmes, which aim to determine long-term trends in aquatic ecosystem health, need to be mindful that any change to stream hydrology—from climate change, fragmentation or stream alteration—can alter capture efficiency of the sampling gear and inadvertently alter species-specific trends. 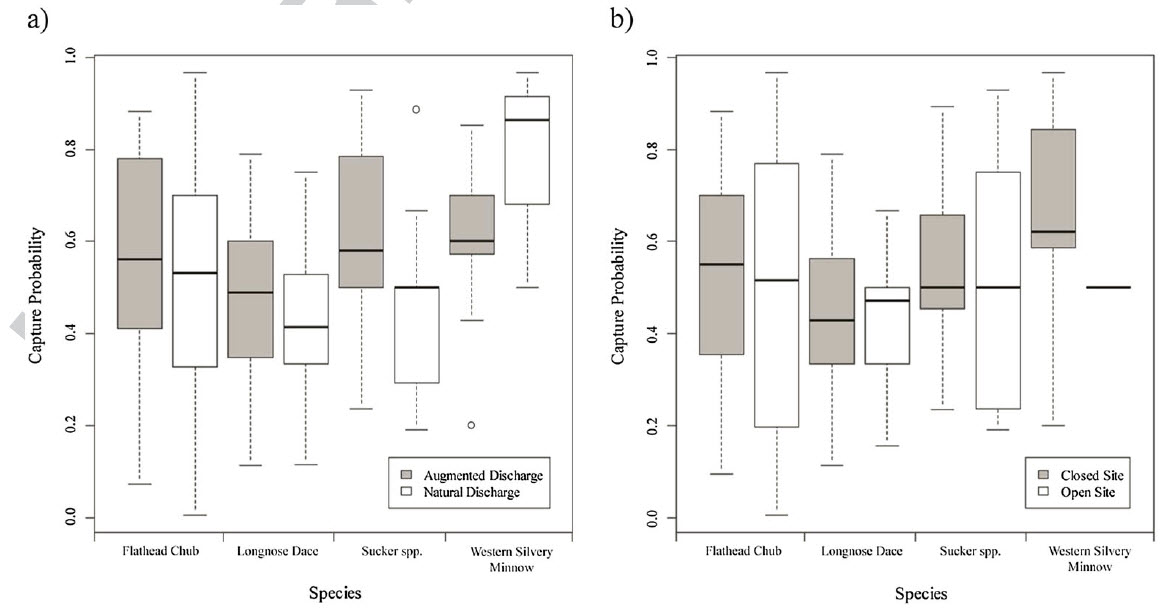