Hydrologic alterations, such as dams, culverts or diversions, can introduce new selection pressures on freshwater fishes, where they are required to adapt to novel environmental conditions. Our study investigated how species adapt to natural and altered stream flow, where we use the threatened Rocky Mountain Sculpin (Cottus sp.) as a model organism. We compared the swimming and station-holding performance of Rocky Mountain Sculpin from four different hydrologic regimes in Alberta and British Columbia, including the North Milk River, a system that experiences increased flows from a large-scale diversion. We measured the slip (Uslip) and failure (Uburst) velocities over three constant acceleration test trials. Uslipwas defined as the point at which individuals required the addition of bursting or swimming to maintain position. Uburst was defined as the point at which individuals were unable to hold position in the swimming chamber through swimming, bursting or holding techniques without fully or partially resting on the electrified back plate. We found individuals from the Flathead River in British Columbia (with the highest natural flow) failed at significantly higher Uburstvelocities than fish from the southern Albertan populations. However, there was no relationship between peak hydrologic flow from the natal river and Uburst or Uslip. Further, Uburst velocities decreased from 51.8 cm s−1 (7.2 BL s−1) to 45.6 cm s−1 (6.3 BL s−1) by the third consecutive test suggesting the use of anaerobic metabolism. Uslip was not different between trials suggesting the use of aerobic metabolism in station-holding behaviours (Uslip). Moreover, we found no significant differences in individuals from the altered North Milk River system. Finally, individual caudal morphological characteristics were related to both slip and failure velocities. Our study contributes to the conservation of Rocky Mountain Sculpin by providing the first documentation of swimming and station-holding abilities of this benthic fish. 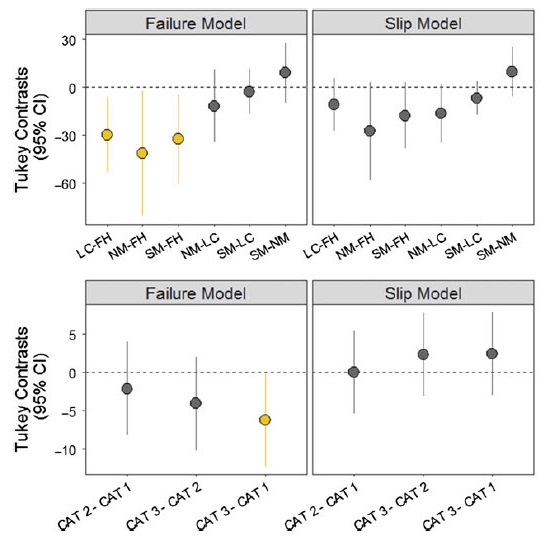