Dr. Poesch and Taylor MacLeod joined the Canadian Freshwater Species at Risk Network Workshop in Burlington, Ontario. Thanks to Fisheries and Oceans Canada and all the participants for a great meeting! Freshwater species at risk research is growing!!!

Anthropogenic factors such as land-use change, pollution and climate change, can cause fragmentation and reduce the amount of habitat by altering preferred conditions. This process can also bring about novel species interactions and, in some cases, create or alter levels of hybridization between closely related species. We assessed the threat of hybridization to persistence of the Rocky Mountain Sculpin (Cottus sp.) and the Slimy Sculpin (Cottus cognatus) in the Flathead River drainage, British Columbia, Canada. Using 731 genetic samples, 10 polymorphic microsatellite loci and mitochondrial cytochrome C oxidase sequences, we assessed: (1) if there are differences in the distribution of Rocky Mountain Sculpin between contemporary and historical (35 years ago) records, (2) if hybridization is symmetrical in terms of sex specific parental contributions, and (3) if habitat preferences contribute to the distribution of pure parental and hybrid populations. We identified three hybrid locations and found that Rocky Mountain Sculpin have a distribution (1200 – 1902 m) that far exceeds the range limit reported 35 years ago (1200 – 1372 m). Additionally, hybrid mating appears to involve similar proportions of parents of both sexes from each species. Lastly, elevation, water conductivity, turbidity, and dissolved oxygen are significant factors predicting the presence of parental species. Only elevation was significant to hybrid presence. The contrasting associations of parental species with different habitat types appears to influence the extent and distribution of hybridization.

Thesis Title: Assessing the impacts of multiple ecological stressors on an endangered native salmonid, the Athabasca Rainbow Trout, in the foothills of the Canadian Rocky Mountains.

To meet my first study objective, I compared Rainbow Trout abundance with metrics associated with mining impacts to aquatic systems, landscape level stressors, abundance of invasive species and general stream habitat parameters between waterbodies along a gradient of ecological stressors.  I determined that Athabasca Rainbow Trout abundance was not significantly different between groupings of streams impacted by the Obed mine tailings release compared with reference streams but was lowest in streams that were both highly turbid and had high abundance of invasive Brook Trout. To answer my second study objective, I used stable isotope analysis to determine trophic position, carbon source pathways, diet composition, niche width and resource use overlap to infer if food resource use changed along a disturbance gradient. I found that Athabasca Rainbow Trout in tailings disturbed waterbodies were utilizing a wider breadth of dietary resources and had substantially higher niche overlap with Brook Trout than in waterbodies not impacted by the tailings release, indicative of greater competition for food resources.

This thesis contributes to our understanding of how endangered Athabasca Rainbow Trout populations have been impacted by multiple ecological stressors and quantifies important interactions between these stressors with fish abundance and food resource use. Fisheries managers may wish to pursue additional measures to prevent subsequent declines in Athabasca Rainbow Trout populations by minimizing the detrimental impacts associated with landscape level habitat degradation and competition with invasive Brook Trout.

The Committee on the Status of Endangered Wildlife in Canada (COSEWIC) has assessed Redside Dace (Clintostomus elongatus) as Endangered in Canada. Here we present population modelling to determine population-based recovery targets, assess allowable harm, and conduct long-term projections of population recovery in support of a recovery potential assessment (RPA). Our analyses demonstrate that the dynamics of Redside Dace populations are particularly sensitive to perturbations that affect survival of immature individuals (from hatch to age-2) and population-level fecundity. Harm to these portions of the life cycle should be minimized to avoid jeopardizing the survival and future recovery of Canadian populations. Meta-population structure was incorporated into analyses. The manner in which catastrophes impacted segments of the meta-population influenced recovery target estimates, indicating that understanding the extent of meta-population structure throughout the species range is needed to refine recovery targets. To achieve demographic sustainability, (i.e. a self-sustaining population over the long term) under conditions with a catastrophe probability of 0.15/generation and a quasi-extinction threshold of 50 adults at a 1% probability of extinction over 100 years, population sizes ranging from 18 000 to 75 000 were required. This required between 3.2 and 13.2 ha of suitable Redside Dace habitat. We simulated three recovery effort strategies focused on improving vital rates (survival and fecundity).  A declining population (λ = 0.89) required considerable improvement to individual vital rates (> 40%) to cease population decline. If, however, survival of all age-classes could be augmented simultaneously an improvement of only 13% was required. Depending on the strategy employed, recovery occurred after 48 to 120 years. Recovery efforts affecting survival of all age-classes provided the greatest improvement to population growth rate and therefore resulted in quickest recovery (48 years).

Most animal populations are composed of stationary and mobile individuals, which can influence metapopulation structure and the spatial distribution of mortality.  We investigated the incidence of stationarity and mobility in two relatively stable populations of Redside Dace (Berczy Creek and Leslie Tributary) in the Rouge River drainage in Canada. Multiple linear regression was used to determine if stationarity and mobility were related to stream flow attributes (mean and 90th percentile of daily discharge; stream flow flashiness). For the mobile fraction of the population, we developed spatial interaction models to determine the abiotic (aquatic habitat variables) and biotic variables (species-level CUE of the fish assemblage) associated with movement.  Results indicated a high level of movement synchrony among populations, with generally similar stationarity and movement bias depending on season. Stationarity ranged from a high of 0.74 and 0.67 (spring 2007, Berczy and Leslie, respectively) to a low of 0 and 0.07 (October – early May and early – late May, Berczy ; October – early May, Leslie). Stationarity was only weakly negatively related to stream flow attributes (mean and 90th percentile of daily discharge), while movement bias was weakly positively and negatively related to stream flow. At the reach level, spatial interaction models indicated that distance and biotic factors (CUE of Creek Chub, Common Shiner, and White Sucker) were important predictors of the probability of moving to a reach, as were aquatic habitat variables (standard deviation of reach volume (positive), mean and standard deviation of depth (positive), and mean stream width (negative)). Results indicate that factors operating at different spatial and temporal scales (stream  flow, species CUE, reach-level habitat) influence stationarity and mobility of Redside Dace, yet a substantial amount of movement variation remains unexplained by environmental factors. Future work is needed to resolve the implications of stationarity and mobility on individual and population-level mortality so that projections of extinction risk can be refined.

The PoeschLab is excited to join the Canadian Freshwater Species at Risk Network (link). Thanks to Fisheries and Oceans Canada for their funding support for fish species at risk.

Stream hydrology is considered the primary factor in structuring freshwater fish communities,influencing stream habitats, food resources, and life‐history characteristics. Changes in stream hydrology, from climate change and anthropogenic sources (e.g. dams, irrigation channels), are thought to have adverse impacts on many freshwater species. The Rocky Mountain Sculpin (Cottus sp.) is a threatened species in Canada. Phenotypes of Rocky Mountain Sculpin were compared across a gradient of four streams differing in stream hydrology. It was hypothesized that Rocky Mountain Sculpin would show body forms minimizing drag in higher flow environments. Using geometric morphometrics and meristic counts, body shape, fin rays, and sensory pores were compared. As hypothesized, high‐flow river systems were correlated with sculpin with more dorso‐ventrally compressed, slender body shapes that minimized resistance to flow (P<0.001). Rocky Mountain Sculpin had more pectoral fin rays in populations with higher flows than lower flows,potentially allowing them to increase friction when gripping onto the substrate (P<0.001), and more anteriorly and dorsally located head pores to improve detection of floating prey (P<0.001). Biogeographic isolation and difference in flow regime were the likely basis for the observed morphological variation. The degree to which these phenotypes become fixed is unknown;however, since phenotypic diversity parallels genetic diversity in Rocky Mountain Sculpin,there is the possibility that persistent selection of these phenotypes can make it difficult to adapt to rapidly changing habitat conditions, such as changing flow. This study emphasizes the importance of considering phenotypic and morphological variation when evaluating how best to mitigate anthropogenic stressors and their impact on freshwater fishes.

Flow Regime across the range of Rocky Mountain Sculpin 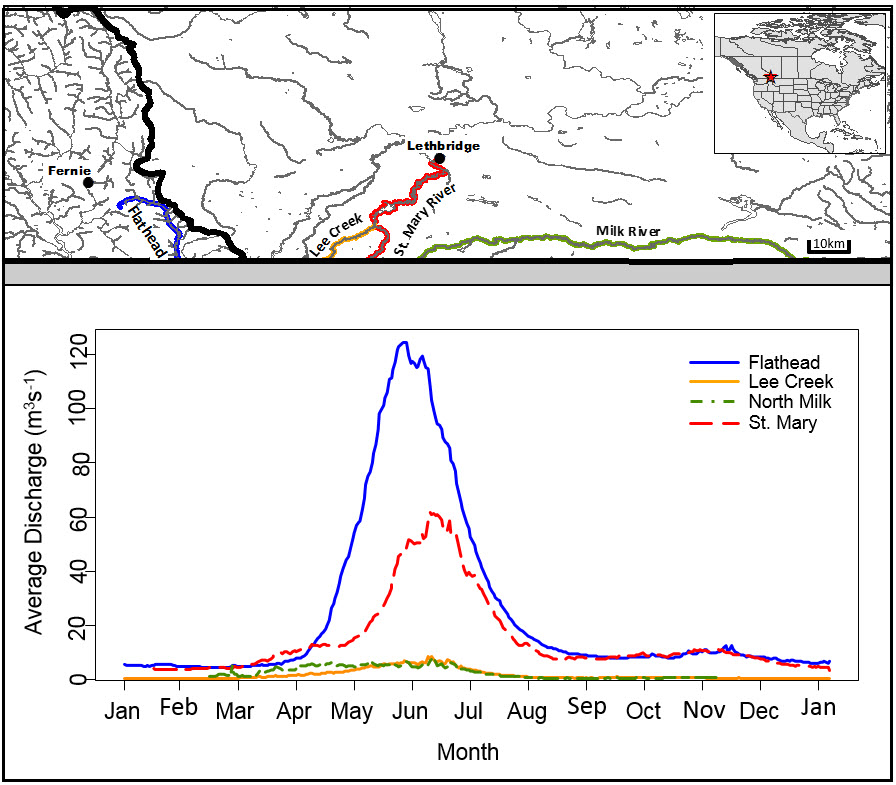 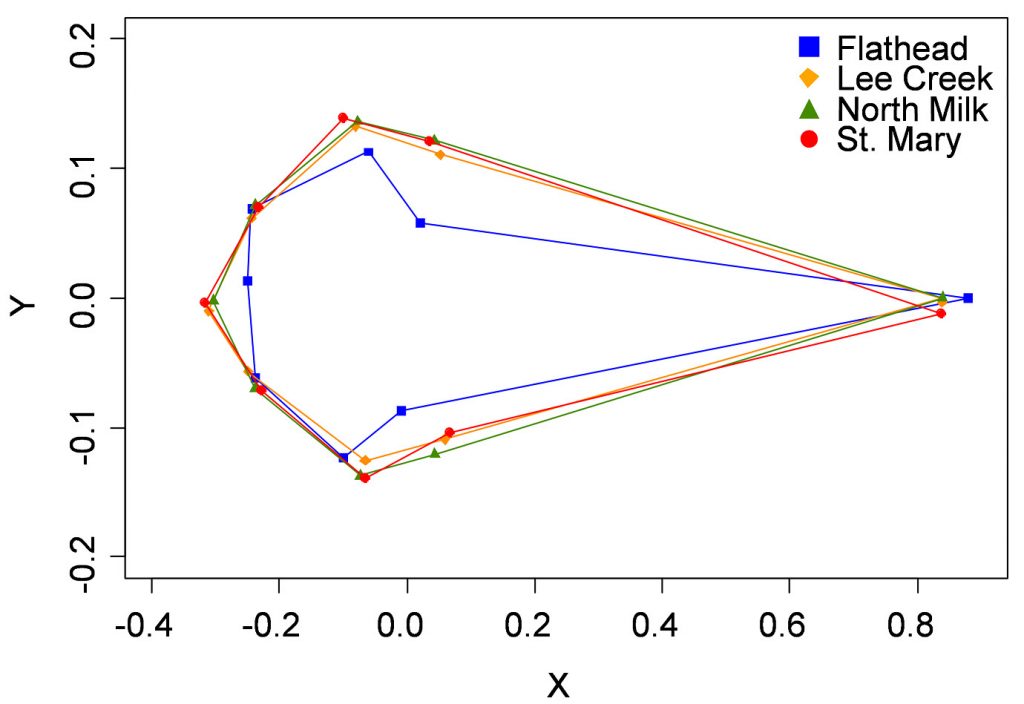 Freshwater biodiversity is presently one of the world’s largest conservation concerns. Both direct and indirect human activities contributing to waterway modifications, climate change, and habitat alteration are causing major declines in freshwater fish species richness and abundance. While these impacts are well studied for pelagic fishes, little is known about how to best direct management efforts toward benthic, dispersal-limited fishes. The Rocky Mountain Sculpin (Cottus sp.), a benthic, sedentary, and federally listed species at risk in Canada, was used to address the following objectives: 1) to identify its susceptibility to varying flow regime, and whether or not it displays morphological adaptation to flow, and 2) to characterize hybrid zones and the driving environmental factors that lead to their persistence. Using geometric morphometrics and meristic counts of fin rays/spines and sensory pores, phenotype was compared across the four river populations in Canada. Systems with higher flow regimes generally had Rocky Mountain Sculpin that were more dorso-ventrally compressed and had meristic features better suited to positioning themselves among cobble substrate and detecting prey in fast moving water. Biogeographic isolation contributed to phenotypic variation, indicating that the Rocky Mountain Sculpin might not be able to quickly adapt to human-induced flow alterations. To achieve the second objective, hybrid zones between the westslope Rocky Mountain Sculpin population (Flathead River drainage, BC) and the Slimy Sculpin (Cottus cognatus) were studied. Using 731 genetic samples and 10 polymorphic microsatellite loci, two hybrid zones were identified more upstream than expected from previous studies. A logistic mixed-effects model revealed that habitat features relating to climate change and water quality were driving an upstream range expansion of Rocky Mountain Sculpin and movement of hybrid zones. While the Rocky Mountain Sculpin, despite their sedentary life history, appears to have more tolerance to anthropogenic habitat alterations that originally expected, their tolerance level likely has limits that can be widely detrimental to the species if tested. Further, given their high levels of phenotypic variation across populations, management efforts involving dispersal-limited species should be directed at the population level. In the event of hybrid zones, which are indicators of more localized environmental factors driving species presence, a more localized scale of management might be required.

Note: once published, copyright is owned by COSEWIC.