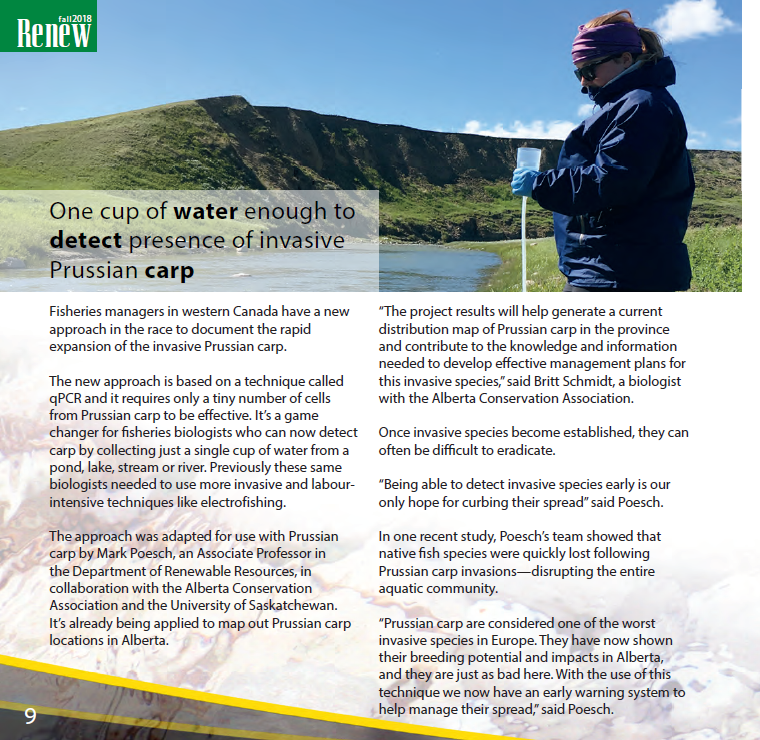 Dr. Poesch is a member of Tracking Change, a program aimed at connecting local and traditional knowledge in watersheds. The Lab welcomes the youth from Alberta and Northwest Territories for the Youth Knowledge Fair! See Outreach Gallery for some photos.

The Committee on the Status of Endangered Wildlife in Canada (COSEWIC) has assessed Redside Dace (Clintostomus elongatus) as Endangered in Canada. Here we present population modelling to determine population-based recovery targets, assess allowable harm, and conduct long-term projections of population recovery in support of a recovery potential assessment (RPA). Our analyses demonstrate that the dynamics of Redside Dace populations are particularly sensitive to perturbations that affect survival of immature individuals (from hatch to age-2) and population-level fecundity. Harm to these portions of the life cycle should be minimized to avoid jeopardizing the survival and future recovery of Canadian populations. Meta-population structure was incorporated into analyses. The manner in which catastrophes impacted segments of the meta-population influenced recovery target estimates, indicating that understanding the extent of meta-population structure throughout the species range is needed to refine recovery targets. To achieve demographic sustainability, (i.e. a self-sustaining population over the long term) under conditions with a catastrophe probability of 0.15/generation and a quasi-extinction threshold of 50 adults at a 1% probability of extinction over 100 years, population sizes ranging from 18 000 to 75 000 were required. This required between 3.2 and 13.2 ha of suitable Redside Dace habitat. We simulated three recovery effort strategies focused on improving vital rates (survival and fecundity).  A declining population (λ = 0.89) required considerable improvement to individual vital rates (> 40%) to cease population decline. If, however, survival of all age-classes could be augmented simultaneously an improvement of only 13% was required. Depending on the strategy employed, recovery occurred after 48 to 120 years. Recovery efforts affecting survival of all age-classes provided the greatest improvement to population growth rate and therefore resulted in quickest recovery (48 years).

Most animal populations are composed of stationary and mobile individuals, which can influence metapopulation structure and the spatial distribution of mortality.  We investigated the incidence of stationarity and mobility in two relatively stable populations of Redside Dace (Berczy Creek and Leslie Tributary) in the Rouge River drainage in Canada. Multiple linear regression was used to determine if stationarity and mobility were related to stream flow attributes (mean and 90th percentile of daily discharge; stream flow flashiness). For the mobile fraction of the population, we developed spatial interaction models to determine the abiotic (aquatic habitat variables) and biotic variables (species-level CUE of the fish assemblage) associated with movement.  Results indicated a high level of movement synchrony among populations, with generally similar stationarity and movement bias depending on season. Stationarity ranged from a high of 0.74 and 0.67 (spring 2007, Berczy and Leslie, respectively) to a low of 0 and 0.07 (October – early May and early – late May, Berczy ; October – early May, Leslie). Stationarity was only weakly negatively related to stream flow attributes (mean and 90th percentile of daily discharge), while movement bias was weakly positively and negatively related to stream flow. At the reach level, spatial interaction models indicated that distance and biotic factors (CUE of Creek Chub, Common Shiner, and White Sucker) were important predictors of the probability of moving to a reach, as were aquatic habitat variables (standard deviation of reach volume (positive), mean and standard deviation of depth (positive), and mean stream width (negative)). Results indicate that factors operating at different spatial and temporal scales (stream  flow, species CUE, reach-level habitat) influence stationarity and mobility of Redside Dace, yet a substantial amount of movement variation remains unexplained by environmental factors. Future work is needed to resolve the implications of stationarity and mobility on individual and population-level mortality so that projections of extinction risk can be refined.

The PoeschLab is excited to join the Canadian Freshwater Species at Risk Network (link). Thanks to Fisheries and Oceans Canada for their funding support for fish species at risk.

Resource development can have a negative impact on species productivity and diversity through the loss and fragmentation of habitat. In many countries, developers are required by law to offset such impacts by replacing lost habitat or providing other forms of compensation. In the case of broad scale development, offsets often cannot be constructed to replace lost habitat “like-for-like” (i.e., they are not ecologically equivalent). In freshwater ecosystems, one approach to habitat offsetting is to create new lake ecosystems, called compensation lakes, to replace lost riverine habitat. In this study, we use a long-term data set (2008–2015) of fish and benthic invertebrate communities from Canada’s first compensation lake in the oil sands region of Alberta, to address (1) whether the assembly of the fish community has a trajectory that is influenced by management activities and (2) determine whether the community composition in the habitat offset is common in natural lake ecosystems within the region. We find a significant decline in the mean trophic level of the lake, where 61.9% of the variation in trophic level is explained by time indicating a strong structuring influence on fish communities. This outcome has enabled the compensation lake to meet overall and single species productivity targets, but we find that the species assemblage and composition is not common within the region. A combination of the founding species community and reduced connectivity of the lake has contributed to the current fish community structure, which may be problematic for the sustainability of the habitat offsetting targets. Our study highlights the need to establish multiple conservation guidelines, using both productivity and diversity based metrics, to provide the best ecological equivalency, which can produce better function, resilience and health within focal species communities in habitat offsets that are not “like-for-like.” 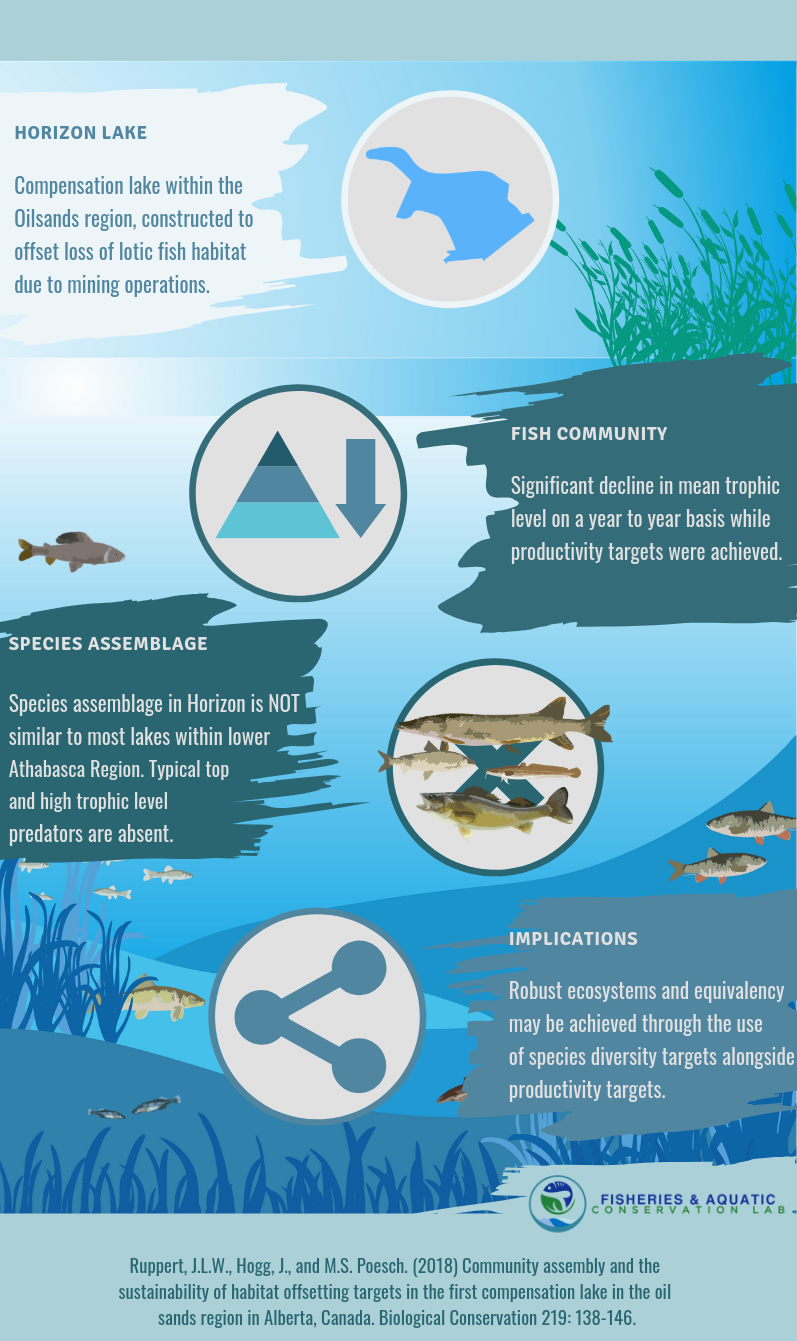 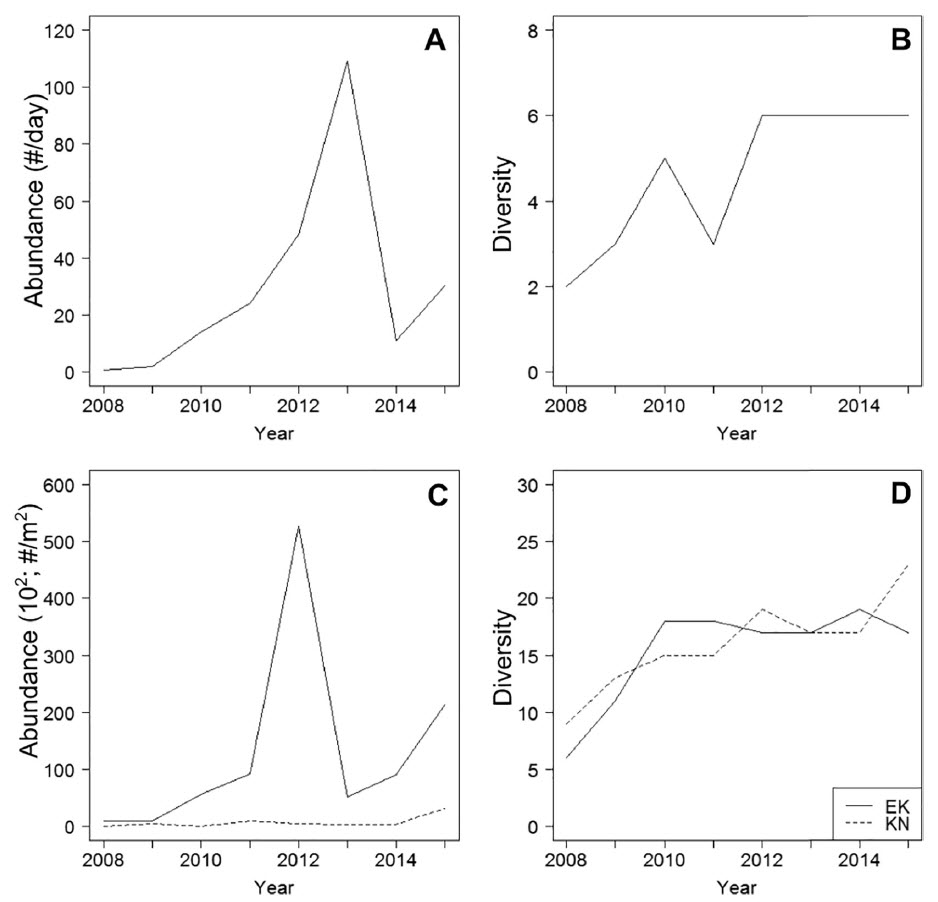 It was a great honour to give a plenary talk on freshwater invasive species and participate in a panel discussion with Dr. Daniel Simberloff (University of Tennessee), Dr. Chris Thomas (University of York, UK), Jason Fisher and Margo Pybus at this year’s Alberta Wildlife Society meeting in Lethbridge. I really enjoyed the discussion on invasive species! I was also very impressed to see as many as five undergraduate students from my Fish and Wildlife class in attendance! Also happy to see my students Sebastian Theis (PhD candidate), Jesse Shirton (undergraduate) and Jamie Card (undergraduate) present posters on their research!

Hydrologic alterations are widespread in freshwater ecosystems worldwide and often detrimentally impact fish populations. Habitat suitability models are commonly used to assess these impacts, but these models frequently rely upon observed fish–habitat relationships rather than more mechanistic underpinnings. The aim of this study was to demonstrate how to incorporate swim performance into a measure of habitat connectivity at a fine scale, providing a method for assessing the availability of suitable habitat for stream fishes. We applied this technique to an endangered species, the Western Silvery Minnow Hybognathus argyritis, in the Milk River of southern Alberta, Canada. The Milk River is an augmented system, where a diversion in nearby St. Mary River augments flow by a factor >3 × (from 1–5 m3/s to 15–20 m3/s). We used laboratory measured swim performance of Western Silvery Minnow to develop a movement cost function that was used in conjunction with a habitat suitability model to assess habitat availability via a recently developed graph-theoretic metric, equivalent connected area (ECA). Stream augmentation altered not only habitat suitability but also habitat connectivity for this species. During augmentation, suitable habitat area declined by 81.3%. Changes in habitat connectivity were site dependent. Movement costs between habitat patches were lower during augmentation due to current-assisted dispersal and increased distance to patches during natural flows from dried streambeds. When movement costs were incorporated into ECA, ECA decreased by 78.0% during augmentation.With changing climate and increasing anthropogenic impacts on aquatic ecosystems, understanding how freshwater fishes relate to their habitat is critical for appropriate management. In many cases, such as the Western Silvery Minnow, mitigating habitat suitability may not be sufficient, as species are unable to reach suitable habitat. The incorporation of swim performance into habitat connectivity assessments, as carried out here, can be easily adapted to other species and situations and can improve the understanding of impacts to stream fishes and increase the effectiveness of mitigation efforts. 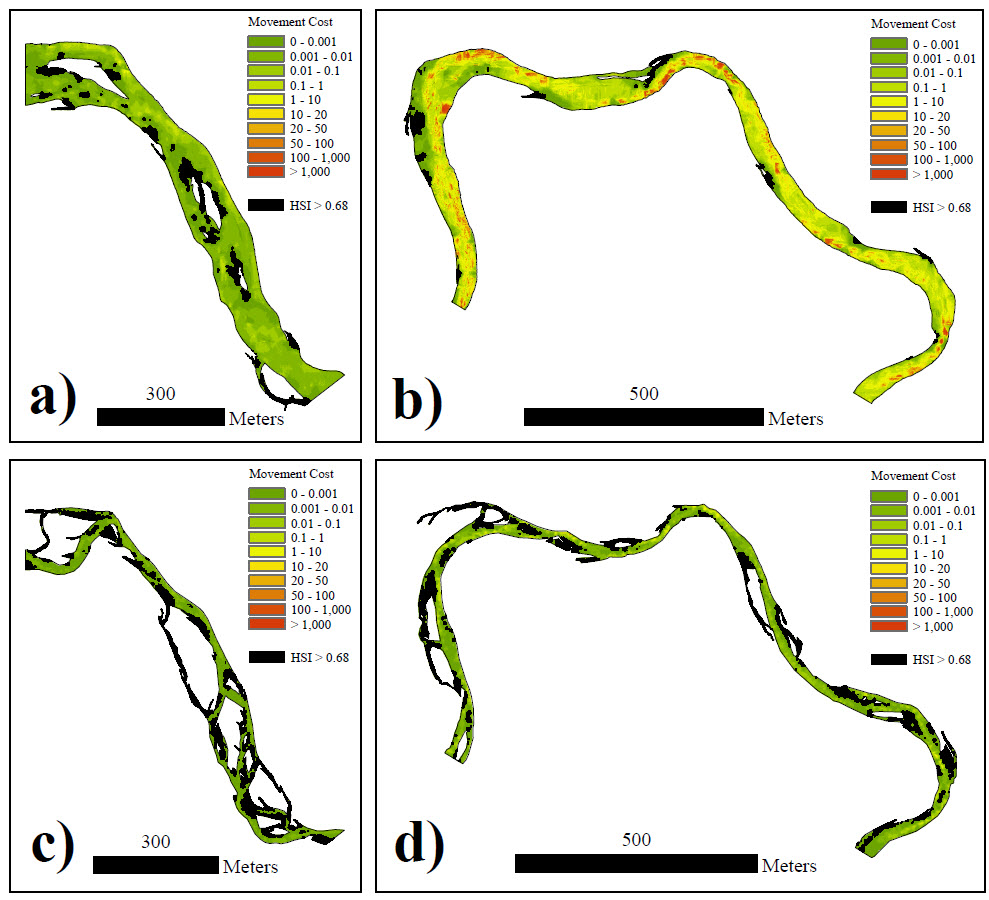